We Hit White Hill: Peak #50 on the Nifty Ninety

(8/2/18) With all of the huge fires raging in California, lately we’ve not known what kind of views and air quality we will encounter when setting off for a new summit on the ‘Nifty Ninety‘ Peak challenge. Last week’s destination was White Hill in the North Bay in the aptly named White Hill Open Space Preserve, Marin County Parks. We were with our good friends Patricia and Tom — and Boo, Patricia’s sweet dog.  White Hill is at 1434-ft. in elevation; its prominence is 308 ft. We had about 5.4 miles round trip to hike. 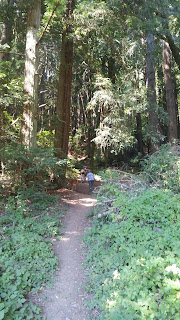 We started from home in the east bay a bit after 9:00 a.m., hoping to avoid the worst of the morning commuter traffic, and being mildly successful considering our route, I-80 W and 101 N, part of one of the most crowded highway systems in the country. It took us about an hour and a half to reach the small parking area alongside Sir Francis Drake Blvd., near Fairfax, about 0.1 mile before the Brown Bridge. 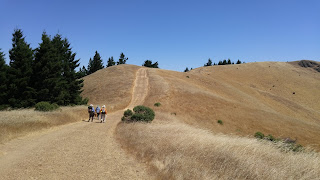 We had all brought along jackets, hats, and gloves in case of fog or wind, but the skies looked clear when we arrived so we left the extra layers in the car.

We followed the sign which said “Welcome to White’s Hill” and set out straight up the Martha McCormack Trail, a dirt trail that quickly became rather steep. That trail joined the White Hill Fire Road, which we followed most of the way. For a little bit we were on Porcupine Trail, which paralleled the road.

I had been concerned about coming back down the beginning part, but Ralph assured me that we would follow White Hill Trail coming back for a more gradual descent. The trails and the hill were clearly labeled on the app maps.me, which Ralph had on his phone. Also, we had printed out the Marin County Parks map , but this map does not show the McCormack trail.

The fog stayed offshore. It was a beautiful day, a bit on the warm side, and I appreciated the shade of the forest with its redwoods, fir, bay, madrone, and oak. After climbing through the band of trees, we reached open grasslands and turned onto the wide fireroad. Unlike some of the other fire roads we’d been on recently, this one took a gradual approach to the highpoint. 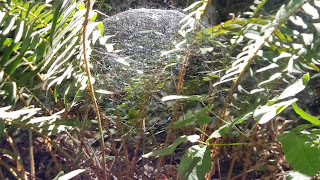 We had a couple of sightings of interest — a gopher snake and its trail, spider we 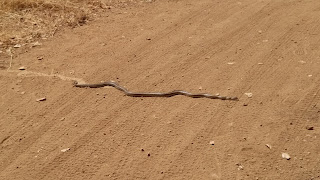 bs of unusual design, and a large, flat billboard-like structure that left us puzzled as to its function. 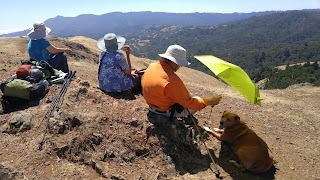 The “peak” was more of a small patch of rock than a monumental outcropping, but it was a great place to sit and enjoy our snacks and take in the vast views. Mount Tamalpais was to the south, Pine Mountain, which we had climbed previously was to the west, the Richmond-San Rafael bridge and other points east were spread out before us. This was not a difficult hike, but it certainly had taken us to top-notch views.

After retracing our steps most of the way, we turned onto the signed Sherwood Forest Fire Road, which quickly led to the the White Hill Trail, which allowed us to switchback easily through the lovely stretch of forest again and we came out near the bridge and the highway. A narrow dirt trail, separated from the highway by a length of barriers, lead us the .01 mile back to our car. 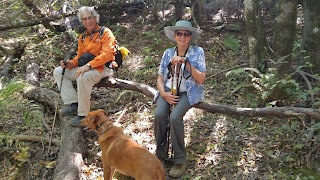 We made our usual brew pub stop in Fairfax at Iron Springs. A perfect end to a perfect peak day — and hitting our 50th peak was worth celebrating!

A bit of history from Mt. Tamalpais Place Names —White Hill is named after “Lorenzo E. White, an argonaut, arrived in San Francisco in 1849 after a 95 day voyage from Panama. Illness forced him to quit the gold fields so he repaired to the San Geronimo Valley where he raised cattle.”