Angel Island and Quality time with our granddaughters 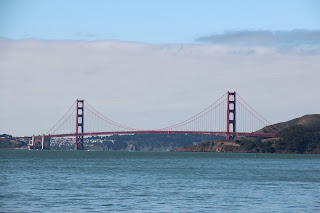 We are on a bit of a roll with the Nifty Ninety, so we decided to take our granddaughters, Madison and Lucie, to Angel Island State Park. Once there, Ralph and I hoped we could convince the girls to climb to the peak of the island’s Mount Livermore, but we weren’t too sure how that plan would go over with a couple of teenagers! 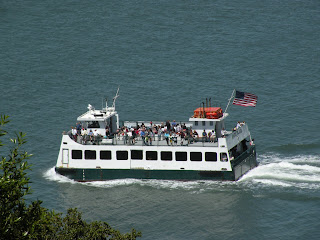 Angel Island, in the middle of San Francisco Bay, is sometimes called the Ellis Island of the West because it served as an immigration station at one time. The island is a very short ferry ride from the small, upscale community of Tiburon. The island offers hiking and biking trails (as well as a tram for non-hikers) and has a small restaurant and other visitor amenities. The views from the ferry and the island are top-notch — the Golden Gate Bridge, San Francisco, Marin County, and the East Bay among them.

Once we arrived and mentioned climbing Mount Livermore as a possibility, the girls took off uphill requiring us to do the fastest pace we’ve ever done on that particular hike. It was obvious they were not just humoring us — they were chatting and taking photos the entire way. As climbs go, the trail is not terribly difficult — but its elevation of 790 feet is equivalent to climbing 79 flights of stairs and by day’s end we had covered more than seven miles.

Coming down from the peak was much faster. Rather than winding its way around the hills, it is pretty much a straight route down to the Perimeter Trail (the five-mile trail that circles the island).

A bit of a problem getting back to the Angel Island Ferry!

We did have a bit of problem on this return, however. We missed a turnoff that would have taken us on a much shorter route back to the ferry dock. We were further back from the ferry dock than we wanted to be and had to pick up our speed so that we would get back to before the ferry made its final return to Tiburon.

Camping is allowed on Angel Island, but not only did we not have reservations, we also didn’t have our sleeping bags! Luckily, the girls still had plenty of energy and enthusiasm, so we made the 2.4 miles in record time with no complaints and no lagging behind.

What a gorgeous way to spend time with teenagers!