On the same gorgeous March day that we climbed San Francisco’s Telegraph Hill and visited Coit Tower (see description here), we also climbed Russian Hill and Nob Hill. This sounds more formidable than it really is — these are 275′, 300′ and 325′ in elevation. Still, climbing all three requires some up and down on San Francisco’s famous hills and by the end of the day we were ready for a stop for some cool brew.

But first
We were in the city with our friends Patricia and Tom to tackle three peaks listed in the ‘Nifty Ninety Peaks’ challenge that the Bay Chapter of the Sierra Club has issued.  We started our day with a ride of BART over to San Francisco’s Embarcadero Street station, stopped at a nearby Peet’s Coffee and Tea at 1 California Street for coffee and scones, and then headed for the first peak of the day: Coit Tower atop Telegraph Hill, which is in the earlier post. 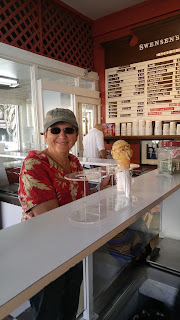 After our tour of Coit Tower and studying our maps, we set out for Greenwich Street. Greenwich took us straight for several blocks and right up the hill into the Russian Hill neighborhood. We crossed over Hyde Street to what looked like the highest point around ( the Alice Marble Tennis Courts/George Sterling Park) but when we referred back to the GPS, it indicated there was an even higher point several blocks away. So we set off and by trial and error (the tall apartments and other buildings didn’t make this easy to do visually).

We really didn’t mind wandering around a bit — especially when we spotted the “First Swensen’s Ice Cream Parlor” on the corner of Hyde and Union Street and were able to treat ourselves to cones. It was a perfect San Francisco day — warm enough to enjoy ice cream, not hot enough for it to melt away.

We made a few wrong turns — in large part because Russian Hill Street is tiny and not easily found even on GPS. The short street is lined by upscale homes occupied by residents who probably prefer to keep the number of visitors down. It’s likely they don’t want the tourists that visit well-known curvy part of Lombard Street, which is not that far away.

(If you decide to look for this point, it sounds complicated but here goes: Off Vallejo Street, East of Jones Street, and opposite Russian Hill Place. Google has this site as “Russian Hill-Vallejo Street Crest Historic Place.”

On to Nob Hill

From Russian Hill, we walked another 6-7 blocks to reach Nob Hill. We went first to the beautiful Grace Cathedral where we admired the interior with its stained glass windows, a Benny Bufano statue, and peaceful ambiance. We walked the outdoor labyrinth (there is another  inside). 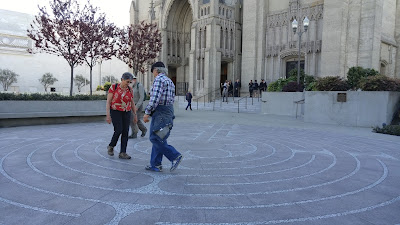 We headed uphill again passing the social club known as the Pacific-Union Club at 1000 California Street. Wikipedia says, “The clubhouse was built as the home for the silver magnate James Clair Flood. The former Flood Mansion…was designed by Willis Polk. It is considered the first brownstone constructed west of the Mississippi River. Along with the Fairmont Hotel across the street, it was the only structure in the area to survive the San Francisco earthquake and fire of 1906.”

At the next corner, we came to the highest point of Nob Hill, the intersection of California and Mason Streets, where the 4-star super-fancy Mark Hopkins and the 4-star Fairmont Hotel reign. At the Fairmont, visitors can sit at the Tiki Bar serenaded by a live band that is seemingly floating on an island in a pool. As I recall, back in the 1950s, there was a faux rainstorm/hurricane as part of the experience. Then, as now, your tasty drink is served with a tiny paper umbrella. 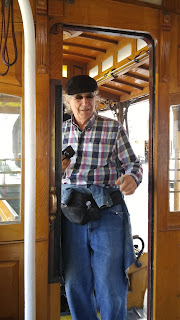 Since we all had well over our 15,000 steps for the day, had walked more than 7 miles, and had climbed the three peaks, we decided to take the California Line cable car down the hill.

We had our beer and snacks at Schroeder’s (German beer hall), and then made our way back to Market Street and the Embarcadero BART station for our train ride home.