Completing the Nifty Ninety Peak challenge was no easy matter. It should be no surprise to anyone that going anywhere during COVID times has been problematical, but figuring out how to reach this particular goal has been well worth the obstacles.

The obstacles for completing the #NiftyNinety as well as the particular challenges of reaching Burra Burra Peak included everyday challenges and unexpected challenges.

This category included: inertia, other obligations or appointments, level of difficulty, distances, injuries or illness, and weather. Things that, pretty much, could happen to anyone, anytime.

We worked through all of these situations at one time or another. It helped greatly that our good friends Tom Coroneos and Patricia Schaffarczyk also wanted to hike and do this challenge, because we kept each other motivated. However,  because there were four of us, planning was more complicated because four schedules had to be considered. Though sometimes changes were needed because of vacations or medical issues, we found that by setting a regular hiking day (generally Thursday), we usually could avoid putting other activities and appointments on our calendars–and go hiking.

Burra Burra was easy. Some hikes and peaks were not

It was obvious from the start that some peaks were more difficult than others–because of the length of the hike required and/or because of the distance from our homes. Some highpoints were so easy on both counts that we could reach and do more than one in a day. We had, for example, great fun taking public transit (BART train) to San Francisco and spending the day visiting Coit Tower on Telegraph Hill, Ina Coolbrith Park (named for the poet and librarian who became a fixture of the Bay Area literary community) atop Russian Hill, and walking the labyrinth of Grace Cathedral on Nob Hill.

As we got stronger over time, we were able to tackle the longest hikes and most distant trailheads. Sometimes this required that we camping overnight or stay in lodging to reach peaks. This was helpful for reaching Rose Peak in Ohlone Wilderness; Berryessa Mountain in Berryessa Snow Mountain Ntl. Monument;  Mount Sizer and Willson Peak in Henry Coe  SP; Pine Mountain and Chalk Mountain in Big Basin Redwoods SP; and Mount Saint Helena and Mount Saint Helena South Peak in Robert Louis Stevenson SP.

Unexpected Challenges
COVID, of course, was unexpected when we started all this in December 2017. At first we were all stuck at home. Then we could go, but had to travel in separate cars. Eventually, after we all were vaccinated, we could carpool again. Still, some parks or trails were still closed temporarily because of concerns about COVID. Wildfires were also a factor. Parks had to close when there were high fire hazard conditions or active fires. Often they stayed closed afterwards because of problems with erosion or other trail damage, or the risk of falling trees. etc.

Burra Burra had an additional challenge
Burra Burra Peak is an easy hike and climb. It’s only 2,281 feet elevation and only about 480 ft. elevation gain. The challenge to us was access to the trailhead. From the northern entrance to the park, Hunting Hollow, which we used for the four other peaks in the park, to Burra Burra is a 20+ mile roundtrip hike. We wanted to avoid that and enter through the Dowdy Ranch, the southern entrance (near Gilroy) to have a much shorter hike–about a 3-mile loop.

Unfortunately, the Dowdy Ranch entrance isn’t open very much. Years back it was open on weekends during late spring, summer and early fall (times when it can be scorching hot!). But in recent years, wildfires and lack of funds for staffing have kept it closed. It is possible to walk in on your own to hike and camp, but hikers have to park/start at the Highway 152/156 junction, go through a locked gate at Bell’s Station, and make a  6.5 mile hike on the private, dirt road to the park’s entrance.

We wanted to avoid all that–we wanted to drive in when the road was open. Finally, we were able to snag a pass to go in on April 30, 2022 to their big celebration, Backcountry Weekend.

The Final Peak of the Nifty Ninety 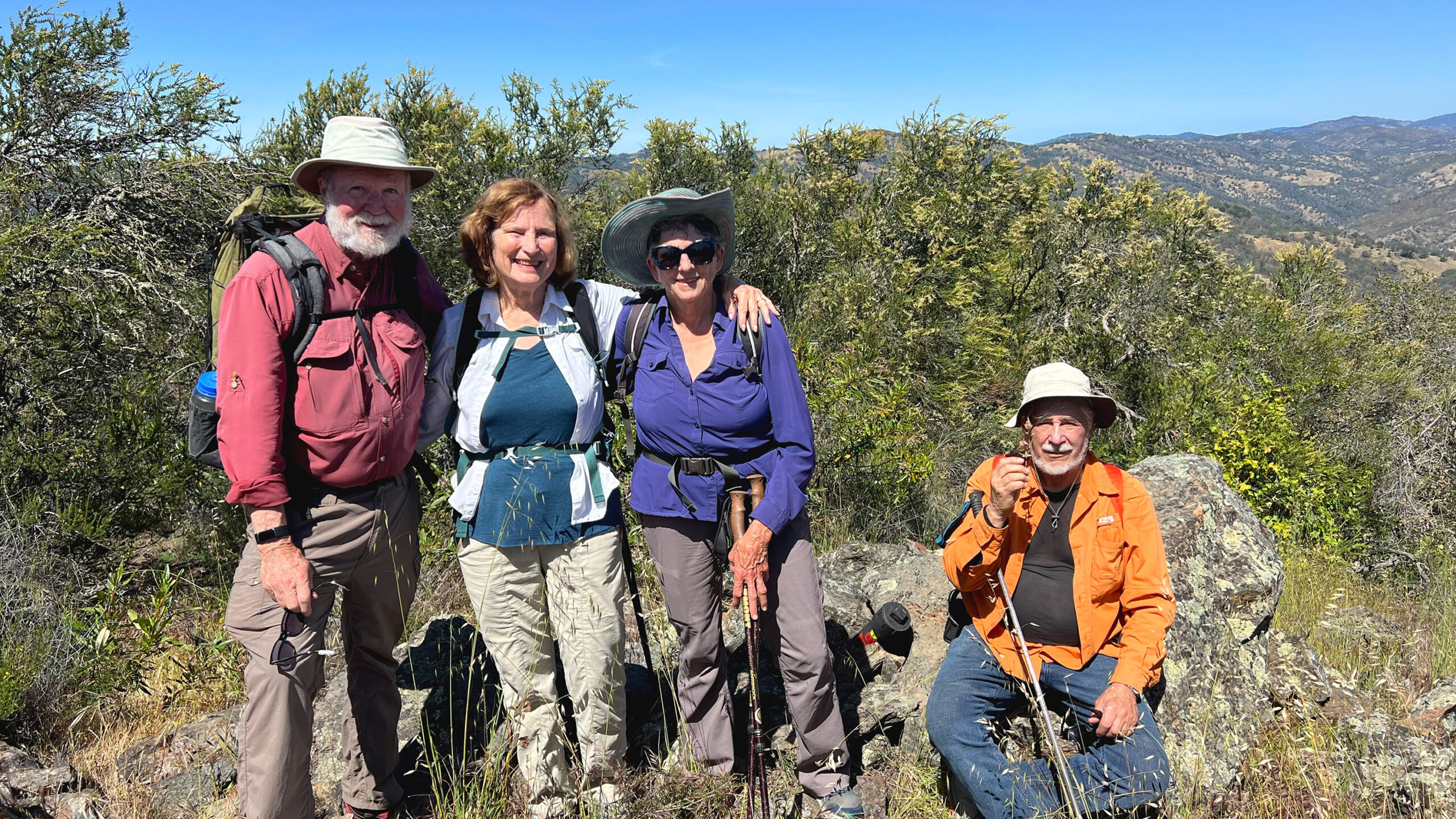 The hike went seamlessly. We entered on the dirt road and made our way to the Visitors’ Center. Staff was seated at tables displaying maps and literature, Henry Coe t-shirts and a variety of rock samples from the park. Restrooms and drinking water were available nearby.

We set out on a single-track trail through open grassland. The trail circled back and crossed the road we had entered on, and there we met up with a serious mountain climber and professional photographer, David Sanger, and his son-in- law. It felt good to be congratulated on our accomplishments–especially knowing that Sanger has climbed throughout the world.

Ascending the Burra Burra Peak was a “walk up” rather than a scramble and we raised our hiking poles in the victory pose. We had lucked out by finding a beautiful day in the park, with many remaining wildflowers. We descended, completed the loop, and returned to our cars. And of course we made our customary stop at a brewpub to celebrate completing the #NiftyNinetyPeaks.

What fun the Nifty Ninety has been! Thanks to the Bay Chapter, Sierra Club for the challenge. Find the list here, and record them on Peakbagger.com