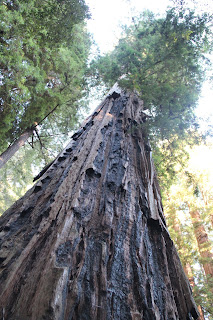 After our overnight in Blooms Creek campground, we packed up (checkout time from the campsite was noon) and drove the short distance to the park’s headquarters. We were headed for Mount McAbee, which according to the Sierra Club’s #NiftyNinety Peaks list, was at 1,730 feet in elevation. It would be peak #60 for us.

Interestingly it was labeled as ‘McAbee Lookout’ on the park’s map. When we reached the prescribed 1,730 foot elevation, we found a bench — we were at the McAbee Lookout. Only days later, did research show that the peak itself, as reported by David Sanger, is at 1,840 feet and would have involved a 10+-minute bushwhack uphill.

Nevertheless, because we reached the elevation given for the challenge, we consider we were successful. Maybe next time I’ll scramble through the thick vegetation to the peak.The hike to Mount McAbee 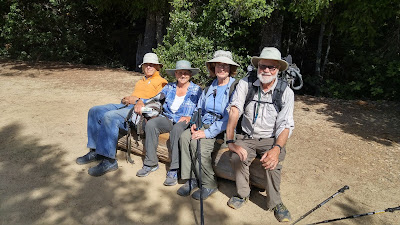 The hike, about six miles round trip, was moderate — and fun. We started out from the parking area by the visitors’ center, passed the amphitheater, and found the Skyline to the Sea Trail. We took that to an intersection and proceeded on the  Howard King Trail (instead of Berry Creek Falls). The Howard King took us on a mostly uphill route all the way to McAbee Overlook. Since the trail had been in a forest of Redwood, Madrone, Bay, Fir (and more) most of the way, it was a treat to reach the overlook and look out to see the Pacific Ocean and Waddell Beach just a few miles away as the crow flies. 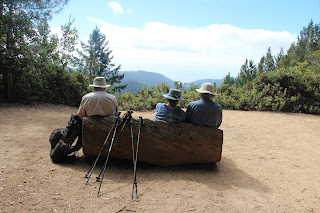 We were happy to be there on a reasonably clear day because we knew that we could have found ourselves with views blocked by fog. We snagged the log bench at the overlook. Moments later other hikers came along who would have also have enjoyed a restful place for lunch — some were going to continue on down the mountain Berry Creek Falls.

We ate our snacks, took a few photos and then returned to our car following the gently descending Hihn Hammond fire road and then went back onto the Howard King and Skyline trails the rest of the way.

To celebrate, we dropped into Boulder Creek Pizza and Pub for lunch. I enjoyed the ‘Light & Loaded’ pizza; the personal size was only six inches in diameter, but it was piled high with chicken, artichokes, mushrooms and more. A great weekend for sure!
Trail hiked: Sep. 29, 2018