I almost felt like soaring after reaching Eagle Peak (2,369′) in Mount Diablo State Park. It marked the completion of the four Diablo peaks included in the #NiftyNinetyPeaks challenge — Diablo, Norte, Olympia, and Eagle–and 71 of the total. Before we did any of them, I read many trail reports and found most of them intimating — steep, rocky, slippery, narrow, poison oak, hot (in summer). So, we waited until the rains had made the trails damp, but not too muddy — and this worked well for us.

I also was elated to reach Eagle Peak because the weather report had been for rain. In fact, when we started from the Mitchell Canyon entrance, it was raining. The first part of the trail was very muddy and Ralph put up his umbrella. (I haven’t gotten around to figuring out how to rig mine yet so that I can use my hiking poles at the same time.)

We walked on the grassy sides of the muddy sections when possible and that made our footing more secure. Having recently had surgery, I did not want to fall!

After leaving the broad, muddy Oak Road, we started to climb on dirt, single track. The trail was still muddy in places, but felt quite safe. And, when we began the long ascent on Eagle Peak Trail, mud was no longer an issue because the incline allowed good drainage. 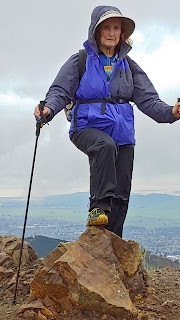 Because I hadn’t been on the trail before, I didn’t have a good sense of where we were headed. Though there were several hills and peaks around and ahead, I had no idea which one was our destination — it turned out that it was hidden until near the end.

I would have liked to have had a better sense of how far we had come, but my Fitbit wasn’t too helpful about the mileage or the number of steps I had taken because the steep terrain had forced me to take baby steps. When we finished, it told me I had done 23,000 steps and gone almost 8 miles. While I loved seeing those numbers, they weren’t really earned. The total distance in and out was about 5.5 – 6 miles.

On the ascent, I worried about what the descent — until I told myself to stop worrying about the future and just wait until I had to deal with it when coming down. Sometimes “live in the moment” is a very good thing. As it turned out, the descent wasn’t difficult at all! 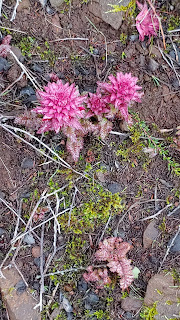 We loved the brilliant green grass with the trees either still dormant or just beginning to leaf out. The views across to other peaks, out over the Delta, and west to Mt. Tamalpais, were lovely and the heavy clouds in some directions and wispy in others was dramatic. The wildflower season had not hit yet — April will probably be prime time, but we welcomed the early Indian Warriors, Indian Paintbrush, and lilies. This hike for me was the perfect level of challenge after suffering cabin fever for much of the last several rainy weeks.

Since we had heard that there was a cache at the top, and some photos showed a trail marker, we looked for them, but both were missing. We double checked our GPS because the flat top to the peak was not particular inspiring — no matter, the views were!

We loved this trail and would definitely do it again (but not in the summer when it is often in the 90s or above). Many folks, sturdier than me, do the Eagle Trail in conjunction with the other three peaks, or the 14-mile round-trip to the higher Mt. Diablo, which takes you from 590 ft. to 3,849 ft. and back again on one of the Bay Area’s toughest day hikes.

Eagle Peak Parking Details
Parking in the park is $10, but free with the California State Park permit. Park is open 8 AM to 45 minutes before sunset. Fill water bottles at the entrance. Flush toilets, water, equestrian facilities, and picnic tables at the entrance.  No dogs on trails. Horses have the right-of-way.

Trails
Starting from Mitchell Canyon Staging area, start out hike south on Mitchell Canyon Fire Road and then shortly after that, take Oak Road to the left. After a quarter mile on Oak Road, turn right onto the Mitchell Rock Trail — passing Mitchell Rock and then Twin Rocks (both on your right when ascending). right on to Eagle Peak Trail to the peak. We did an out-and-back, but many people make a loop either deeper into the park, or back down to the parking lot from Eagle Peak (but it starts with a good scramble downhill).