Rose Peak Is A Challenge!

We finally found an opportune time to hike Rose Peak in Ohlone Wilderness. This would take us to Number 89 on our list of the Nifty Ninety peaks.

We had the time. The weather forecast looked reasonable–though there was mention of a bit of rain on the news. The trail had reopened after earlier closures due to wildfire and trail damage. We were ready to go!

As soon as we decided on March 18-19, I went online to order Ohlone Wilderness Permits from East Bay Regional Park District and to reserve a campsite for Maggie’s Half Acre, which is the closest camping area to Rose Peak. Our next step was pulling our backpacking gear out of its winter hibernation. It was considerably easier packing for one night than several because we only needed one dinner and breakfast and a few snacks for along the way. We had to carry drinking water for the hike, but we knew a water faucet was available at the camping area. It did need to be treated, so we also brought a filter.

We had previously hiked, and backpacked, through Ohlone Wilderness from the Del Valle Regional to Sunol Regional. That’s about a 20 miles thru-hike, depending where you park your car. It’s a challenge, one that Tom Stienstra, former Chronicle Outdoors columnist, has called a real “butt-kicker”.

But the Ohlone Wilderness trail bypasses the actual peak! To reach Rose Peak, you have to take a slight side-trip of about .2 miles off the main trail. We had never taken the detour. We decided this time we would do an out-and-back from Sunol, rather than do the thru-hike again. We thought starting from Sunol would be easier, and it would certainly make it easier to get back to our car than doing a car shuttle like we had before.

However one gets to Rose Peak, it is pretty grueling–and that’s not just the opinion of a couple of seasoned 80+ year old hikers. Online, a quick search finds such descriptions as “tough, strenuous,” “hard, and these reports are generally from people half our age. The descriptions, however, also describe it as beautiful with far-reaching views to Mt. Diablo, Mt. Tamalpais–and if weather allows, snow on the Sierra. We can definitely vouch for that too.

Most hikers start from the parking lot near the Sunol Visitor Center. After crossing Alameda Creek, they take Canyon View and McCorkle to the Cerro Este intersection, and on up to the first set of backpacking sites, Sunol Backpack Camp, in Sunol Wilderness. However, that means a 1,000′ foot initial climb, then a 300′ ft. drop down into the camp.

We settled on an alternate route. We crossed the Alameda Creek Bridge, but then continued on the Camp Ohlone Road. This is a relatively gentle up and down route that we have taken previously many times as a day hike. It travels  alongside Alameda Creek, a lovely creek that runs through a gorget and not only provides water for wildlife habitats, but also supplies water to several Bay Area communities including San Francisco.

Along the way, we passed picturesque “Little Yosemite” area and the “W” tree. Just before reaching the locked gate about two miles along, we turned uphill onto the Backpacker Trail and took he steep route uphill about a half-mile to the backpack camp. This required climbing about 700 ft. to the camp, but at least we didn’t have to lose any of that elevation gain. We also liked that our preferred route was about 1.2 miles shorter than the suggested route.

Rose Peak and we reach the first backpacking camp

We signed in at the gate that enters the Sunol backpack camping area and passed by its seven widely-separated campsites. We noticed that each site had a picnic table, and the camp itself had a faucets (with untreated water) and an outhouse. Continuing uphill, we went passed another gate, this one allows the wilderness permit holders to pass through San Francisco Water Department land. On the far side of this protected area, we reached the department’s second gate, and entered Ohlone Wilderness.

The oak trees that shaded us along the Camp Ohlone Road were far below us–as were the woodpeckers that thrive there. Now we were in open grassland. The cows munching on the lush green grass of spring looked up as we moved by, but were content to continue grazing.  Soon enough the grass will be dry and amber-colored and the exposed hills uncomfortably hot for hikers. 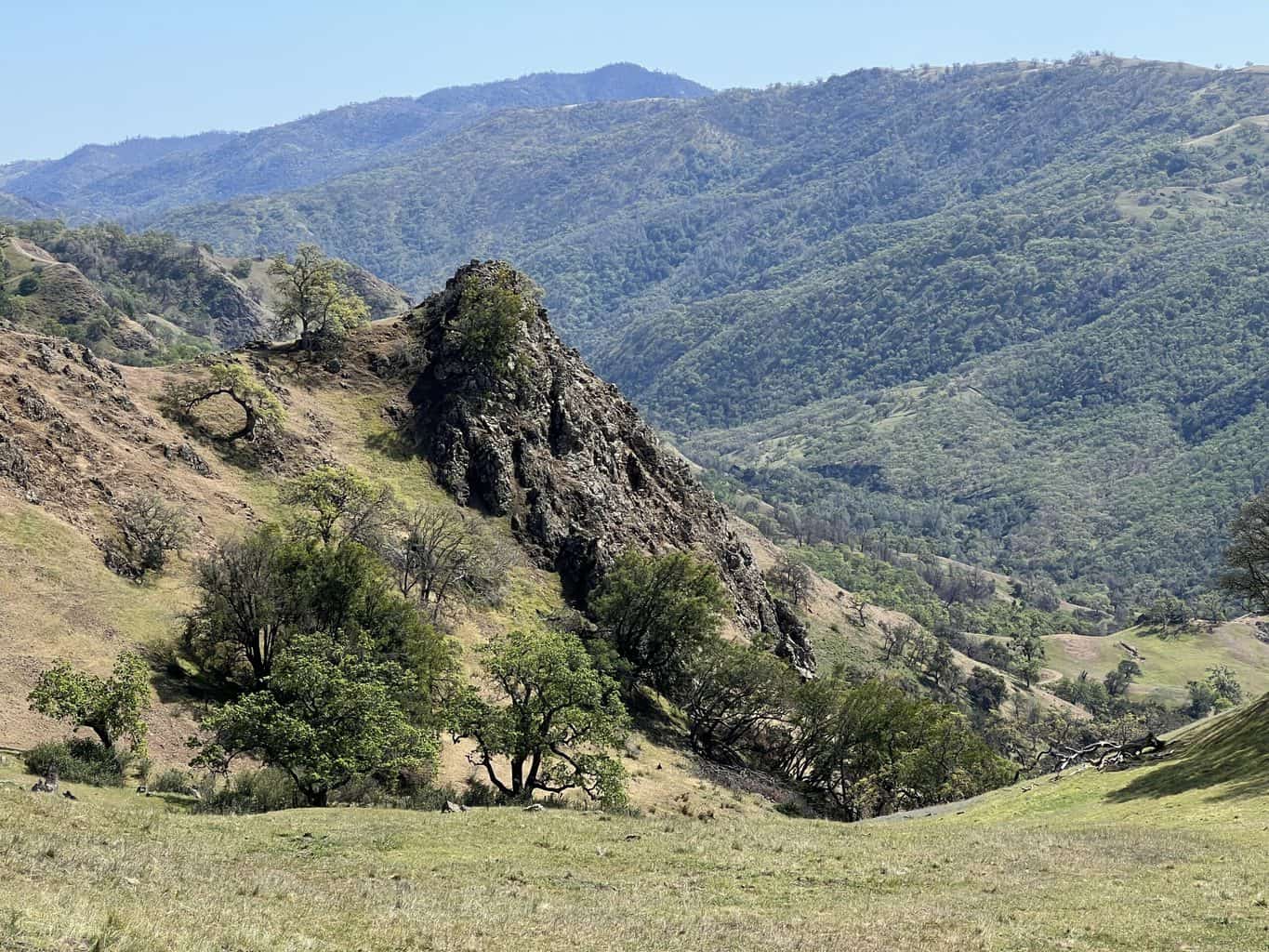 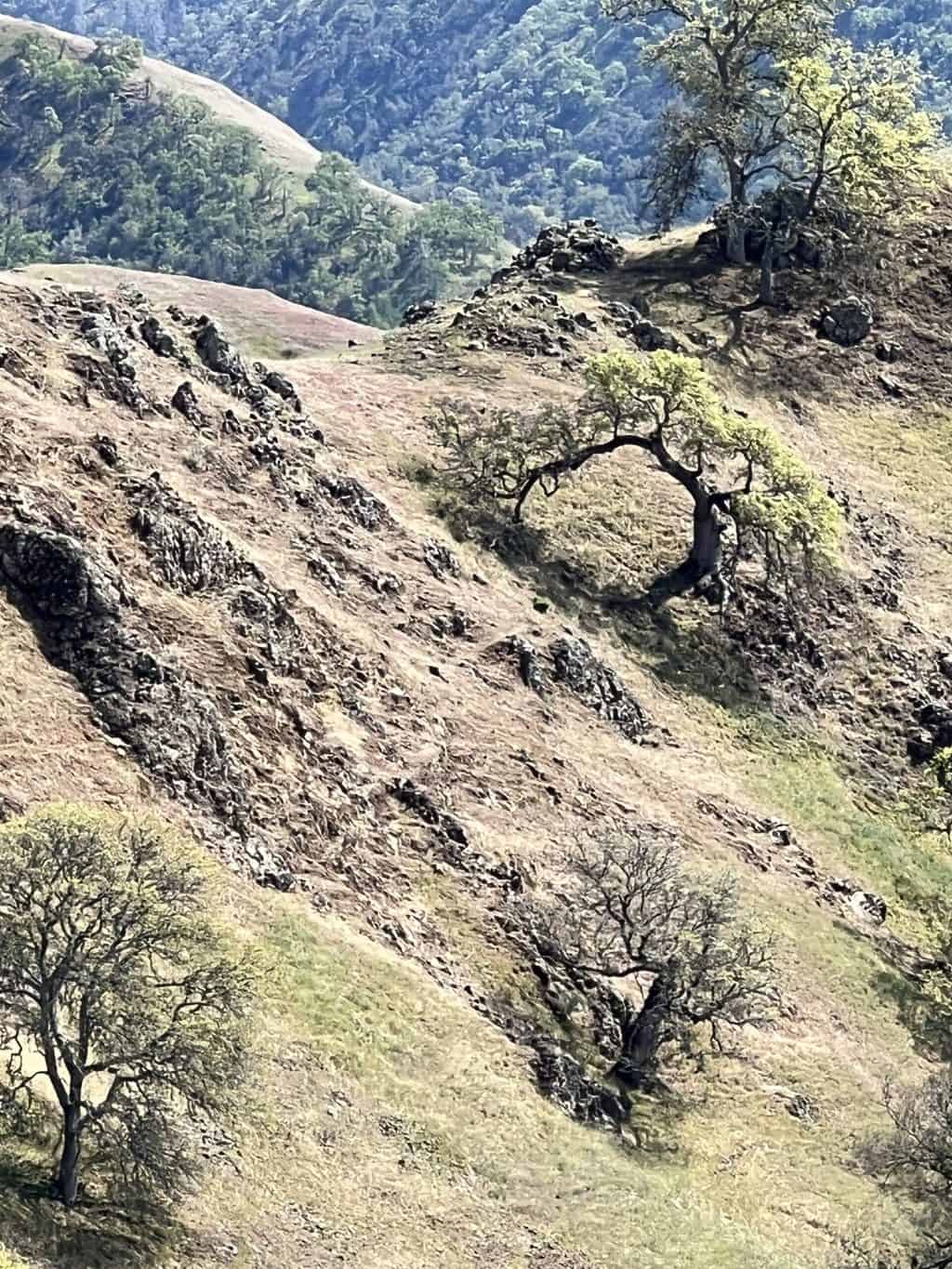 We reached Doe Canyon Horse Camp. Given the name, I wasn’t sure what to expect. There may be a story explaining why it’s called both doe and horse, but we found it was a horse camp. We were happy to have reached this point–it meant we had climbed the steepest, most brutal, part of the route. We were at 3,230 ft. Both the turnoff to Maggie’s Half Acre’s three campsites where we planned to stay, and to Rose Peak were then only about 1.25 miles farther. The turnoff to Maggie’s camping was at 3,590 ft. and Rose Peak was 3,812 ft.

Though we were exhausted, we had to decide whether to go directly to the peak first and then over to set up camp, or go directly to the campsite when we reached the summit and find the peak in the morning. Because It was increasingly looking like it would rain, we decided to head for the peak–we didn’t want to take any chance of having to skip the peak!

The side trail leading to the peak was well marked. And the  ascent to the peak was easy–no scrambling required to reach the large flat top. A hiker we had met on the way up had told us that people often left a rose on the peak. We spotted an old tree stump where someone had placed a couple of bright, plastic, rosy-colored blooms. Moments later we were snapping photos and admiring the views that the clouds allowed.

Camping at Maggie’s Half Acre.
A short additional hike and we reached Maggie’s half Acre and our reserved campsite #1. It was a large site, with a couple of rocks to sit on, many shrubs and several oak trees nearby. Unfortunately, the pit toilet as well as the water faucet, were farther down the hill than we’d anticipated (sites 2  and 3 would have been better choices), but Ralph gamely headed down to collect and filter water.

We noticed that a large area nearby, close to a large oak tree, was disturbed. Wild pigs, no doubt, but the dig marks seemed old and we decided we had found a good place to set up our tent.

We prepared our backpacker meal and then crawled into our small tent. There was no one else nearby, but all was not all peace and quiet. I had forgotten that this “wilderness” is under flight paths coming and going into SFO or Oakland Airport. The air traffic seemed nonstop for a couple of hours, but mercifully, it greatly dropped off at  9or 10 PM–and so did I!

Ralph can normally sleep through anything, but unfortunately his air mattress developed a leak. It would not hold air, he also had a rather sleepless night. At least no pigs ran amok during our stay.

Hiking out the next morning
We were up early–a few drops of rain while we were having our coffee and tea sped our departure. Thankfully, the return hike to Sunol was mostly downhill and not so steep that we had to watch every step along the way. 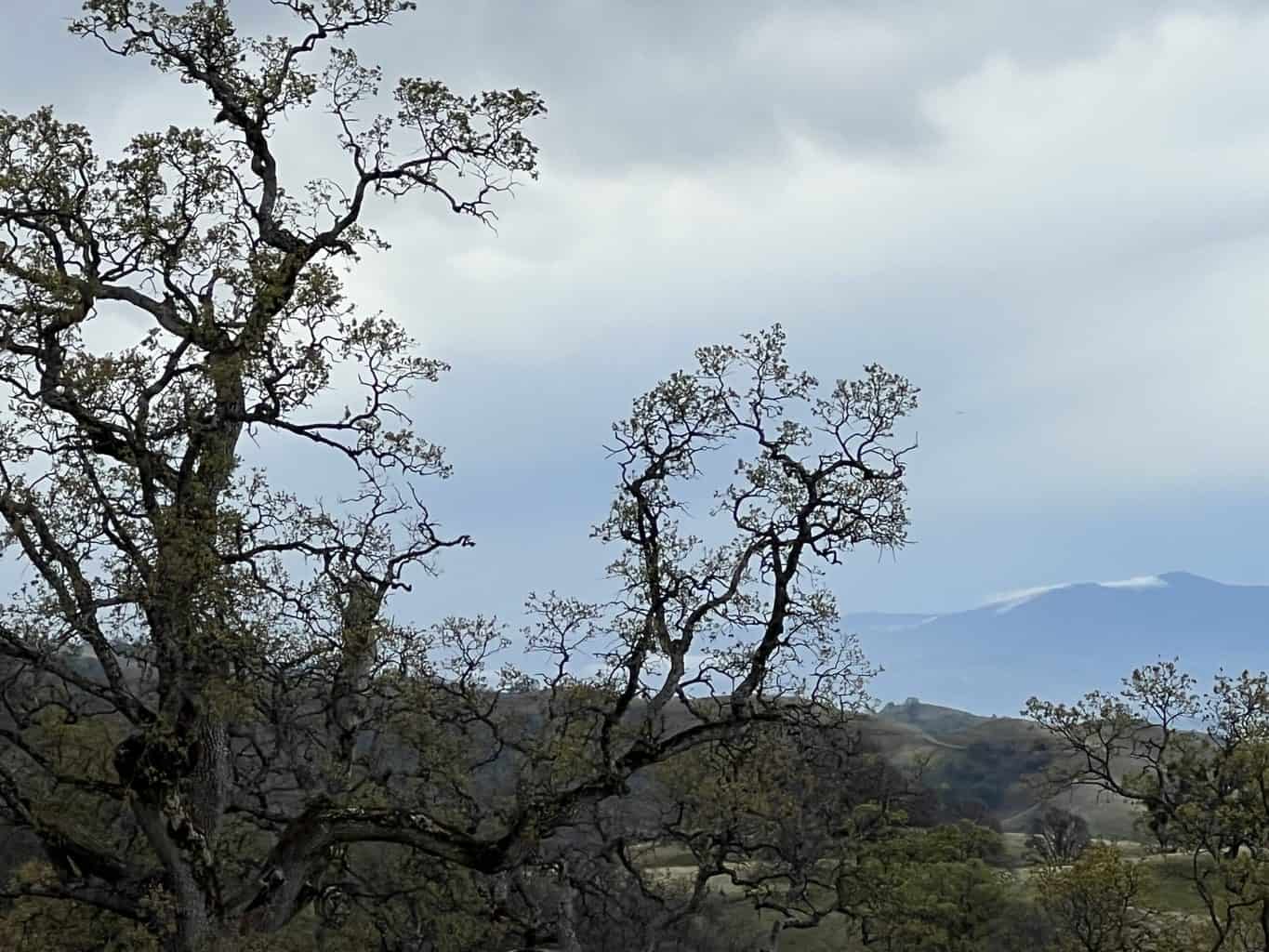 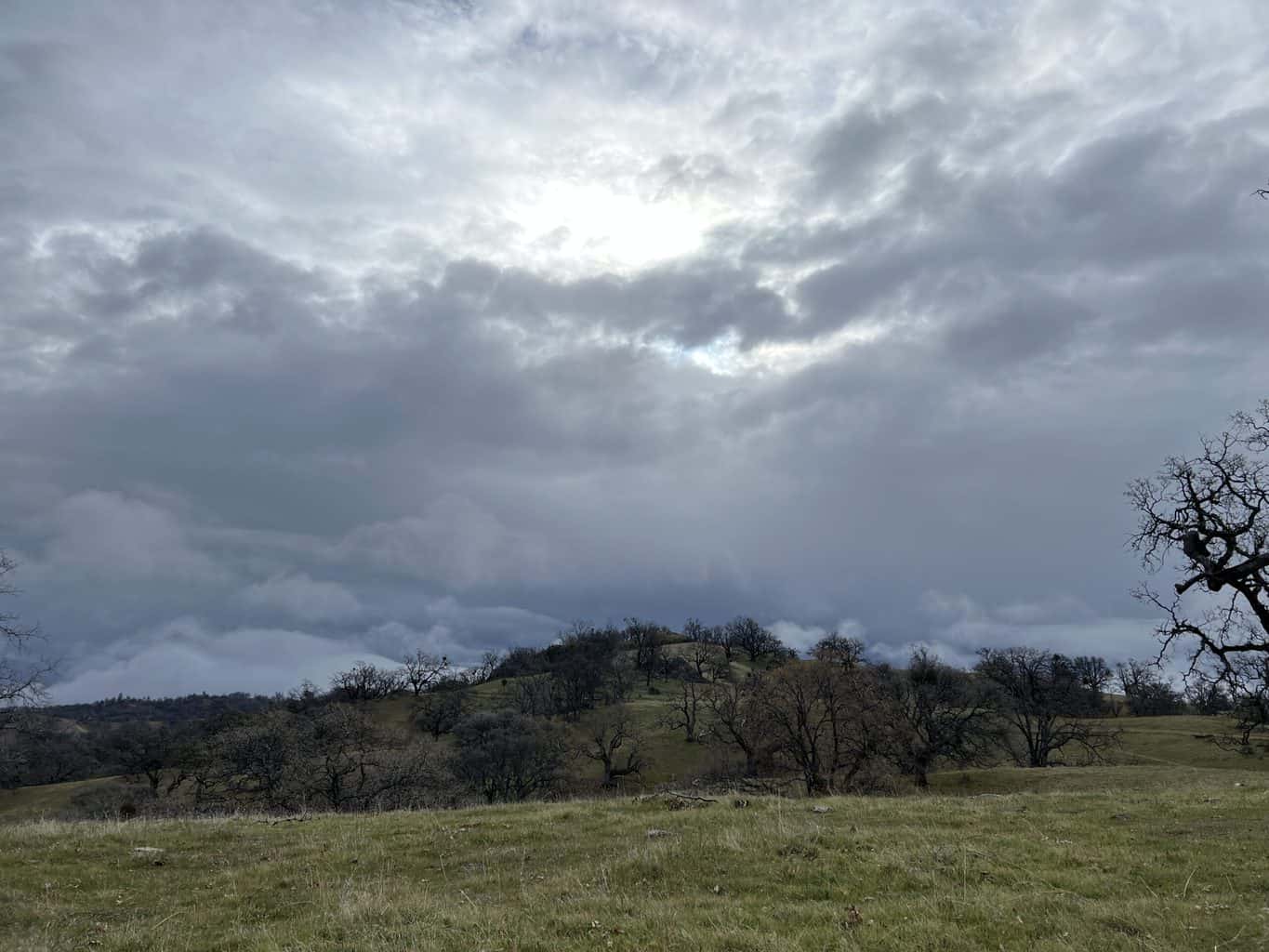 On our way, we ran into a woman who was was wearing a T-shirt from the annual Northern California Six-Pack of Peaks Challenge. She was struggling with the climb, as we had been the first day. We compared notes. She was 65, but when we mentioned we were 81 and 85, she rose to the challenge. She said she was inspired, and we reassured her she could make it too. I was so proud that we had just finished a modified version of the challenge–modified because we had now completed all six peaks, though not always on the suggested routes.

And the rain?
The rain held off until we got back to our car and started home! “Whew,” indeed!

More About the Six-Pack of Peaks Challenge:

(By the way, it is optional to register and pay the entry fee for the Six-Pack, but it is for a good cause, Big City Mountaineers.)

Next up: Burra Burra Peak in Henry Coe State Park