It was with some trepidation that we set out for Black Mountain (2,812′) and Windy Hill (1,905′) two Midpeninsula Regional Parks south of San Francisco. It was not the elevation of the two Nifty Ninety Peaks that concerned me, it was the unsettled weather we had been having. Nevertheless, we were looking forward to hiking to our peaks #72 and #73 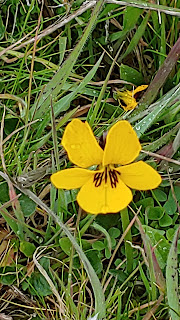 , so we grabbed our packs and set out for an hour+ drive from our home in Oakland.

Since it was outside of commute hours, the traffic wasn’t bad, but the narrow Page Mill Road up the hill from Hwy 280 was windy enough that I had begun to wonder if I might be prone to car sickness. However, we arrived at the parking area of the Monte Bello trailhead of Monte Bello Open Space Preserve without incident. Being a weekday, there were only two cars in the lot. If this had been a weekend, I expect we would have seen many bicyclists on the trails — as it was, we saw only two hikers and one bicyclist. 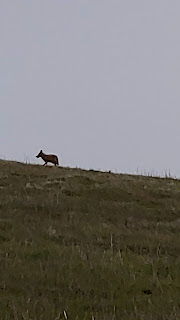 We picked up a map of the South Skyline Region and studied the maps on the signboard. Even so, we were a bit confused about where to find the trailhead. We took a narrow dirt trail up a hill to the left, but found we should have proceeded straight ahead and slightly downhill on the wide dirt trail just beyond the trail signs. Shortly after, there was a split — Stevens Creek Nature Trail turned to the right, but our route along Canyon Trail, was to the left. At 0.5 miles from the start, we reached another split — we left Canyon Trail and turned left onto Bella Vista (Beautiful View). The next intersection was another 0.8 miles, we turned right onto Old Ranch Trail. It was along this section of trail that we saw a coyote and two groups of deer.

After 0.5 miles, we hit another intersection. Here there were three choices — a gravel road (Montebello) and two dirt trails. All would have worked — the left one leads directly to Montebello Road, a middle dirt trail goes into the backpacking camp, and the dirt trail to the right curves around and all will converge again on Montebello Road at 0.4 miles. Once at that intersection, it is just over 0.2 miles to Black Mountain. 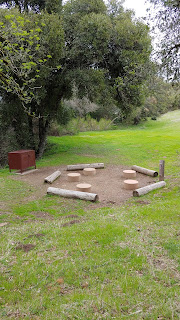 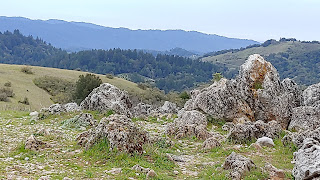 A Grand Vista from Black Mountain

As we neared our destination, we could see that there were multiple transmission towers ahead. I thought that once again we would reach a peak that was covered with ugly steel structures and surrounded by chain link fencing. But as we neared the towers we looked at other hills nearby and realized that just another few  hundred yards ahead was what seemed to be an even higher point. We continued on up the road and saw off to the right a slightly higher rise — the mountaintop was covered with dozens of gorgeous rock formations. We found comfortable places to perch while we enjoyed our lunches and the grand vista.

On our hike back out, we started with a slight variation so that we would go through the backpacking camp. After that we retraced our steps back to our car.

This was a moderate hike of approximately 5 miles roundtrip with a gradual ascent and descent almost the entire way. Trails were very well maintained. It was still early for wildflowers and our views were limited because of cloud cover, but it still well worth doing. There are outer routes to the peak that are more on the order or 12-miles round trip and would be rated strenuous.

Details: Outhouses at the parking lot and at the backpack camp (camping by permit only). 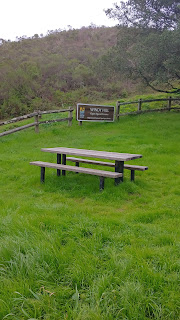 Reaching Windy Hill was easy from Black Mountain — requiring only a drive of 4.9 miles north of Page Mill Road along Skyline Blvd going north (or 2.3 miles south of La Honda Road, Hwy 84).  This is another preserve held by the Midpeninsula Regional Open Space District — and another opportunity to be grateful that so many have worked so hard to set aside and maintain these  beautiful lands for the public’s enjoyment. 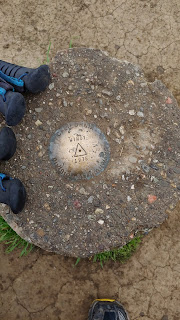 Parking was easy. We pulled off Skyline at the Anniversary Trail dirt turnout alongside a small fenced in grassy area complete with welcoming picnic table (and outhouse). We picked up the trail brochure and brochure, grabbed our umbrellas because it was now raining, and started down the single track, dirt trail to the left (north).

The Anniversary Trail was easy to follow, and a gradual ascent. At 0.7 miles, we saw signs indicating the short trail on the left to the Herb Grench (first leader of Midpen) Overlook, but we stayed on the main trail as it wound up to the summit of Windy Hill. After admiring the views, limited though they were by the precipitation, we retraced our steps all the way back to our starting point-making this a 1.5-mile roundtrip hike. 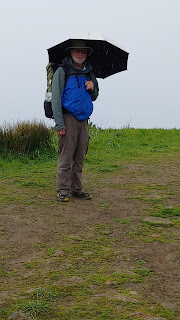 If it had been clear, we could have seen not only the Pacific Ocean, but also Mount Hamilton, Mount Diablo, and Mount Tamalpais— all of which we had previously climbed on the Nifty Ninety! However, all was not lost —we didn’t encounter any ticks (which others have reported on other trails) and we didn’t experience the windy days for which the trail is named.

There are many additional trails and miles within the preserve. The northern half allows dogs if on leash. Info on trail conditions: 650-691-1200 or www.openspace.org

Tom Stienstra, on SF Gate, writes up some of the other hikes here.