The Sierra Club’s Nifty Ninety Peaks challenge doesn’t just get us to the hills and mountains in our nearby regional, State, and 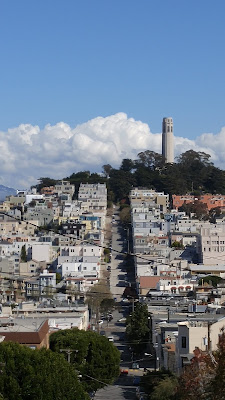 Federal parks, the challenge also takes us to San Francisco. Earlier this month, we had planned to climb Monument Peak near Fremont in the East Bay, but the recent/threatened rain had made the trails muddier and slipperier than we wanted to try.

We decided to take an urban walk. The Challenge lists 10 peaks in San Francisco:
Twin Peaks (counts as one), Tank Hill, Mount Sutro, and Mount Davidson (which we had already done); Hayes Hill, Corona Heights Crag, and Bernal Heights (which we have scheduled for early April); and Telegraph Hill, Russian Hill, and Nob Hill. This beautiful March day we did the last three. 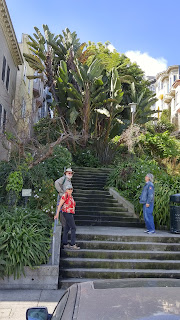 Our “team,” which mainly consists of my husband Ralph, our friend Patricia Schraffarczyk, and me, was joined by another friend, Tom Coroneos, for this outing. Boo, Patricia’s lively dog, who loves our hikes in the wide open spaces, stayed home because he wouldn’t have been happy staying on a short leash on this city hike.

San Francisco has Telegraph Hill and Coit Tower
After a short stop at Peet’s Coffee near the BART Embarcadero station, we set out for Coit Tower, also known as the Lillian Coit Memorial Tower, atop the highest point of Telegraph Hill. The elevation of the hill itself is given as 275-285 depending on where you search for info. The tower itself adds an impressive 210-feet, but since we took the elevator to the top, I don’t think we’ll take credit for that additional height.

The tower was was built in 1933 using “Lillie Hitchcock Coit‘s bequest to beautify the city of San Francisco. At her death in 1929 Coit left one-third of her estate to the city for civic beautification. The tower was proposed in 1931 as an appropriate use of Coit’s gift. 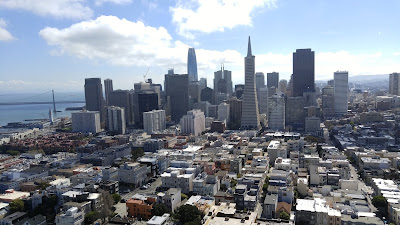 The art deco tower is popular with visitors in part because of its terrific 360 degree views. One can see downtown San Francisco, twisty Lombard Street, busy Pier 39, the trendy Ferry Building, as well as Angel Island, Alcatraz, the Golden Gate and Oakland-San Francisco Bay Bridge. We were thrilled that we had come on a day with blue skies and puffy white clouds, but it would have been just as much fun if we’d been there to watch fog creeping in over the bay. 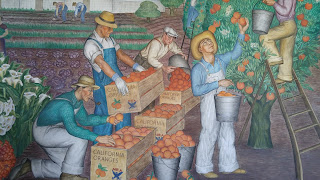 We also were captivated by the murals on the first floor. Most are frescoes that were created at the time of the tower’s construction and reflect the artists’ beliefs in (to varying degrees) racial equality and to leftist and Marxist political thoughts. 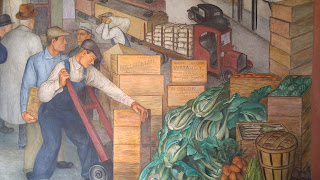 It’s free to enter the tower and view the murals at ground level; $8 (adult) admission is charged to take the elevator to the top for the views or to go on the tours held periodically  to see the murals in the spiral stairway. Because none of us had visited the tower in several years, we were very happy to see that the recent restoration work had returned many murals to their former glory. 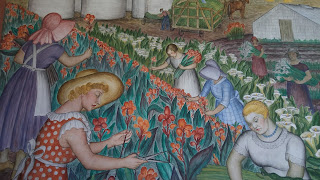 This is San Francisco at its best! It’s often considered a tourist site, and it is, but there’s no reason for residents to miss out!