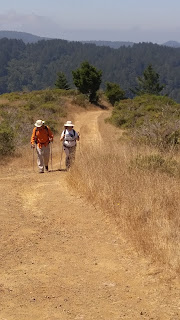 When planning to hike with friends to do one of the Nifty Ninety Peaks, we take turns deciding which peak to climb. This week it was my turn, and I was worried. I felt responsible — maybe more responsible than necessary. I had chosen Barnabe Peak in Samuel P Taylor State Park. This was to be the 54th peak for Ralph and me.

Barnabe had several things going for it. The weather forecast looked promising. I didn’t expect it would be too hot because we wouldn’t be far from the coast and the fog would probably keep the heat down. There were a couple of trail options — ranging between 5 and 8 miles. The summit was only 1,466 ft. And finally, we could reach the trailhead within an 1-1/2 hour drive time.
However, there were some things I found worrisome. Most online reviewers called the route we wanted to follow, primarily on the Barnabe Fire Road, “difficult” and the ascent as “steep.”

Having recently slipped and fallen on the Burma Trail on Mount Diablo (requiring a visit to the Emergency Room), I felt some concern about just how steep, “steep,” was. (In case you are wondering, Triple-Crown hiker Scott Williams says of the Burma, “This is a very strenuous hike….” “By summer, every little pebble begins to act like a ball bearing….”)

Another in our small group, Patricia, had also fallen recently. Her ribs still hurt and I knew she didn’t want to repeat that kind of mishap. And our friend Tom had just undergone a procedure on his knee — a cortisone injection to alleviate pain, and I was certain he didn’t want to slow the healing process.

But, I told myself, we have all completed dozens of steep climbs. I tried to put aside my concerns for the time being. “Difficult” and “steep” can be very subjective terms. One person’s perception of what is difficult can be very different from another’s. It depends on the level of fitness of the hiker, their hiking experiences, the weather, and the trail’s condition. I decided that we should just go to the park and then assess for ourselves how challenging this particular hike would be.

After paying the $8 day-use fee at the park’s kiosk, we drove further in and parked near the picnic tables and restrooms. The initial stage of our route took us through Redwoods and alongside Lagunitas Creek. In the winter, we might have seen salmon in the river because Lagunitas Creek, which joins the ocean at Tomales Bay, and its tributaries are considered important spawning and rearing grounds for the endangered coho.

We crossed Sir Francis Drake Road, passed the Madrone Group Camp, and started up the Riding and Hiking Trail until we reached the start of the Barnabe Fire Road. As we ascended, we found that it was somewhat steep — but we thought more accurately rated as “moderately difficult,” not “difficult.”  It was reassuring that it was not nearly as hard as many of the Nifty Ninety trails we had already done. 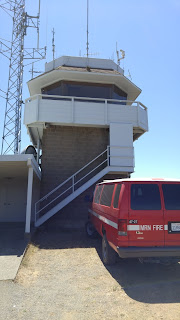 We made good progress on the climb and I was relieved and excited to spot Barnabe Peak, a grassy summit partially covered with transmission towers and the Marin County Fire Department’s Dickson Lookout. As we approached, we could hear a couple of firemen chatting while they ate their lunches. After talking with them, we found a quiet spot to sit and enjoy our own trail snacks.

The views went in all directions, but what I enjoyed most was following the “peep peeping” of a covey of California Quail. The adult female adult perched atop a small outcropping of rock, but herded the dozen chicks into the brush whenever we got too close. 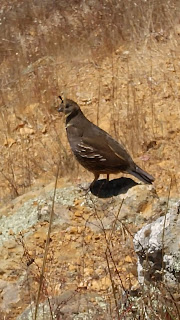 The descent took us along the ridgeline as we continued on the Barnabe Fire Road. The trail conditions were fair. In most places, the road wasn’t very rocky, but when it was both rocky and steep, we were able to walk on the short, dry grass on the side — a safer way to descend.

Though the uphill part of the hike had been mostly out in the open, we had enjoyed coming upon a few trees offering shade. On the descent, we found even more shaded stretches. By early afternoon, the temperature was in high 70s to low 80s. Because of the rising temperature and our exertion, we welcomed places to cool off under the shelter of oak, bay, fir, and buckeye. At the bottom of the hill, we turned onto the Cross Marin Trail, which paralleled Sir Francis Drake highway — this time on the other side of the road.

I had worried for naught—no one fell, we had a beautiful hike (5.8 miles)—and the stop at the Iron Springs Pub in Fairfax was a perfect end to our outing.